Original print of the Pride of Africa Collection™

All original photographs by Klaus Tiedge (+01.07.2019)  are continued to be available as limited edition prints and will from now on be released as an estate print with an embossed signature of Klaus
Tiedge and authorised by artistʼs wife, Sandra Tiedge.

Monarch of Lewa I

Big, strong black rhino, yet delicate ancient creature with unusual long horn captured in the grasslands of Kenya as if it was reigning over its kingdom. A powerful and impressive portrait of this a rhinoceros. Beautiful and unique piece of artwork to decorate a boardroom wall, office or your living room space.

After I had already captured the most amazing wildlife in the Masai Mara, Amboseli and Tsavo National Parks, I decided to head northeast of Mount Kenya to Lewa Conservancy area. We camped at night and woke up very early in the morning, excited and hopeful see the unique black rhino. Park rangers warned me that the black rhino is very shy compared to the white rhino, and even the slightest irritation can make them aggressive and move quickly.

On one particular morning, as the sun rose, we were watching over Lewa’s plains with the hills in the background. Very slowly a black rhino approached the grasslands from the distance. As it came closer, I could hardly believe my eyes. It was out of this world! I had never seen a rhino of such beauty, with a horn of almost half a meter in length. It was only about 45m away, and my finger was shaking on the trigger of my camera, when suddenly the rhino looked up at us. This gave me the chance to press the shutter exactly three times before it turned away again and disappeared into the open plains.

We were stunned and in total awe of this incredible creature. A colossus, like from ancient times, stood in the grasslands as if it was reigning over its kingdom – so big, so strong, yet so delicate.

I am very proud to share this amazing photograph with you, and I hope to create more awareness of this precious African animal. It must be protected. With this image I also want to help conserve its beauty while we still can.

Each artwork is delivered with a Certificate of Authenticity

Only unframed prints qualify for FREE Delivery and shipping

There are no reviews yet.

Be the first to review “Monarch of Lewa I” Cancel reply 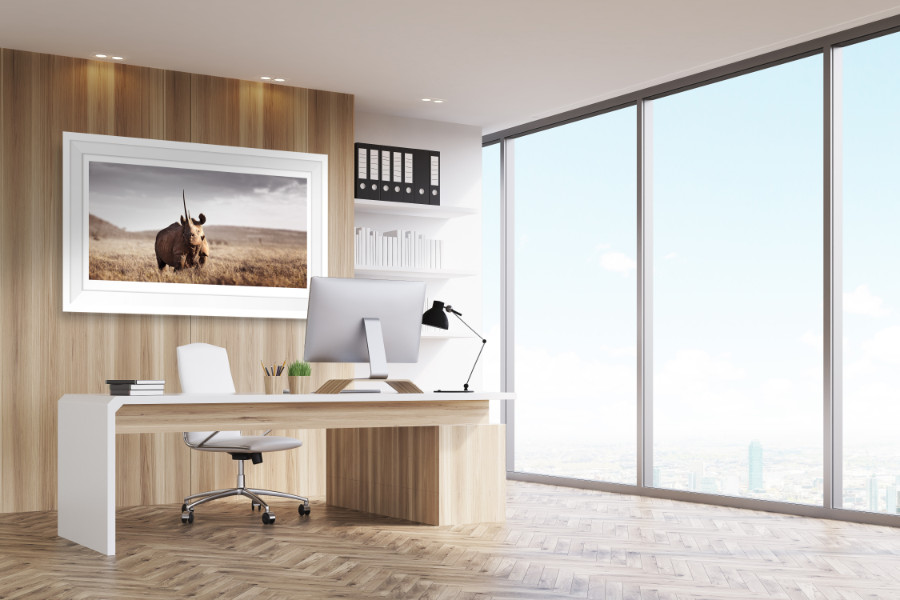 Handcrafted with love © 2022 All rights reserved.